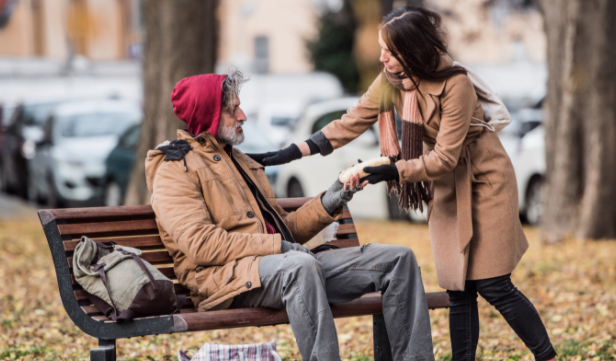 Cheryl was a beautiful and friendly prostitute who regularly stayed at The Crest Motel, a seedy, oftentimes violent establishment that my mom managed for seven long years in Vallejo, California.

Cheryl liked me because I was a harmless 11-year-old boy who would never hurt her, unlike other males in her life. I sometimes saw her with a black eye, swollen lips and bruises on her otherwise gorgeous body.

One day, she was beaten so badly by her pimp, my mom hid her in one of the motel rooms for a few weeks. She brought her food and drinks. My mom continued to hide her out off and on for the next two years.

One day Cheryl left and never returned. She disappeared into the treacherous crevices of the streets, like many of the other motel guests.

“Kindness is choosing to acknowledge and celebrate the beauty in others, regardless of whether or not they can find it in themselves.” — RAKtivist

Helping Cheryl was just the tip of my mom’s iceberg of kindness. She “hid out” other prostitutes. She sometimes let families stay at the motel for additional time even when they ran out of money. She bought groceries for disabled guests.

When the police came looking for known criminals who were at the motel, my mom told them she hadn’t seen them— not because she feared retaliation, but as she said, “They got enough problems. I ain’t gonna make it worse.”

When people are treated unfairly or feel like they don’t matter, it can kill their self-worth. It stops them from seeing their inherent beauty.

Being kind to people is acknowledging that they’re beautiful human beings who matter in this world. This is why it’s so important to be kind to everyone, but especially to those who have been treated badly their entire lives.

My mom experienced a lot of abuse her entire life, yet she was undoubtedly the most loving, compassionate person I’ve ever met. Even though the world tore her apart, she would go to great lengths to help others.

She’d get holiday and birthday cards from tons of people who she helped through the years. People from different parts of the US and a few other countries visited my mom because she had touched their lives in powerful ways.

Who was the kindest person you ever encountered?

“A single act of kindness throws out roots in all directions, and the roots spring up and make new trees.” — Amelia Earhart

I definitely learned how to be kind and compassionate from watching my mom in action. Although I was a drug dealer in the rough streets of Vallejo, I made it a point to practice kindness as much as possible.

When people in my circle sold drugs to people who didn’t pay, those who didn’t have the money were “taxed,” which meant they had to give up all of their belongings or get savagely beaten. A $200 drug debt could result in the loss of a car or everything of value in someone’s house.

When people didn’t pay me, I’d give them more time or take it as a loss. I regularly bailed friends out of jail, rescued people who were in trouble and stopped a lot of people from beating or robbing other people. I sometimes repaid people’s outstanding drug debts so they wouldn’t get taxed.

I was no saint. Selling illegal drugs was clearly wrong. But I still tried to carry on my mom’s legacy of kindness — even in some of the darkest places.

The benefits of kindness are far-reaching. My mom’s kindness inspired me and who knows how many other people to help our fellow human beings.

Study after study has shown that kindness really is contagious. One act of kindness can lead to many more kind gestures.

When I drove back into Vallejo from the San Francisco bay area, there was a bridge with a toll plaza that had about eight toll booths, sometimes affectionately called “extortion booths.” On four separate occasions, I tried to pay my toll, but the toll collector told me the person in front of me already paid it.

This small act of kindness inspired me to pay bridge tolls for quite a few other people. I talked to other people in the San Francisco bay area who experienced the same thing. How many of the people that me and others helped went on to help other people pay their “extortion booth” fees?

Changing or Saving a Life

Sometimes just one act of kindness can change — or save — a person’s life. I’ve read a lot of stories in which people were at low points in their lives and then one kind gesture inspired them to not give up. They kept moving forward and went on to do great things.

One night I was listening to a woman named Evelyn tell a story about a very distraught man who walked into her office when she was a social worker. He was going through a lot of mental and emotional anguish.

Evelyn patiently talked to him for a little over an hour. He left her office feeling calmer and more peaceful.

But after talking to her and realizing that someone did care about him, he decided not to kill himself. He also said his life greatly improved after that single conversation she had with him that day.

One of the most powerful stories I ever read was about Cameron Hollopeter and Wesley Autrey, two men who were at a New York City subway station on a fateful day. Cameron had a seizure while waiting for a subway train. He then fell onto the tracks as a train was nearing the station.

Wesley performed an unbelievably heroic act that easily could’ve ended his life: he jumped onto the tracks and pushed Cameron to the ground, between two sets of tracks. Then he laid on top of Cameron, covering him with his own body.

The train operator couldn’t stop the train in time. It rolled over both men, missing Wesley’s head by inches. Five cars rolled over the men. Later, Wesley said, “I don’t feel like I did something spectacular. I just saw someone who needed help. I did what I felt was right.”

What kind act did someone do for you that changed your life in a significant way?

There are an endless number of kind gestures that can help other people who are having problems in life. Don’t worry. You don’t have to donate large sums of money, perform super-human acts of generosity or jump onto train tracks.

Sometimes just doing small things can have a big effect on other people.

You can simply compliment retail workers to make them feel appreciated. Start a conversation with someone who looks lonely or sad. Let a driver in front of you merge into your lane.

Buy a meal for a disabled veteran. Do some errands for an elderly neighbor or family member. Encourage or help someone who’s trying something challenging. Talk to a shy person at a work meeting or an event.

“We rise by lifting others.” — Robert Ingersoll

We’re hardwired to help our fellow human beings. Every act of kindness causes our brain to release dopamine, our main feel-good neurotransmitter. Studies have shown that people who give to others are happier for longer periods of time than those who don’t give to other people.

Helping others has allowed us to build communities, cities, states and civilizations. It’s helped us survive wars, famines, disasters and other catastrophes throughout history.
During the COVID-19 pandemic, we saw countless people across the world helping others who were sick or in need. Sadly, many of our healthcare heroes lost their own lives after contracting this destructive virus while saving the lives of others.

Despite the violence, racism, and division that occur every day, there are a ton of people all over the world who love helping others.

Helping your fellow humans can have exponentially powerful effects. Just one compassionate gesture can spread kindness to more people than you can imagine.